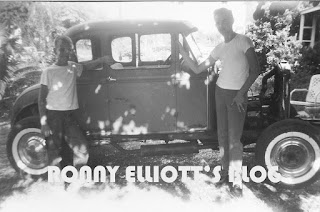 What I wouldn't give to have a little less. How is it that I see every broken soul that I pass on the sidewalk? Every dog limping near a busy street? Sometimes I see it all as a gift, some kind of super power. A sad blessing.

It's not depression, at least not any textbook brand.

It is, in fact, the centerpiece of who I am.

That's me in the snapshot with my cousin, George, and my very first car, a 1931 Ford. I'm fourteen. He's twelve. By the time I was old enough to drive legally I had run through a bunch of them.

There's not a single material thing that I've wanted and not had. Eventually. Oh, I've never been rich. Not very rich. For very long. If it had been money that moved me, though, I might have been.

The rest of the story I'll leave to  your zen interpretation of all that I've written before.


Posted by ronnyelliott at 3:07 AM