Chapter Two- Have You Heard The One? 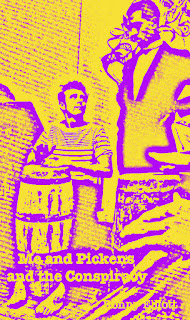 Have You Heard The One?

Well, I'm one of those people who will tell anybody anything. I mean I can keep a secret but you'll have to remember to tell me that it's a secret. By the time that Pickens and I had been hanging around swapping tales for a couple of weeks he knew every story of debauchery that I have. There aren't that many. Oh, I wish there were. I've always had bad intentions.

I'm a writer because there comes a point where you can't call yourself a rock'n'roll musician. It's not that I outgrew rock'n'roll. I never outgrew anything, fercrissakes! I just outlived it I'm sad to say. Of course I went into the rock'n'roll racket to pick up girls. That's the only reason anybody ever went into that line of work and yes, I use the term loosely. Really loosely.

Aptitude tests from the eighth grade on all indicated that I was destined to be a preacher. There's only one reason that anybody ever went into that line of work for the most part and that's the same reason. Well, that and the good hours. An hour a week, that's my kind of profession.

Turns out, to my surprise, that I've used most of my time in the rock'n'roll industry preaching. It took me the first twenty or thirty years to notice.

Never picked up any girls, either. To say that I have failed in my chosen career is to grossly understate the situation. I've pretty much ended up with some stories, some memories, a bunch of songs and a permanently broken heart. Could have been worse.

Pickens, now- there's a different story. I can't tell you that he's my hero because I'm trying to give up heroes. He does serve as something of an inspiration and source of fascination for an aging hippie with a Peter Pan complex.

All of my stories are from the sidelines, Forrest Gump-like. I held up Jimi Hendrix's Marshall cabinets in case he whacked them. Elvis offered to teach me karate. I watched Janis change clothes and Jackie Wilson showed me his scars. My only role in my stories is that I was there. I exist. Not really much of a legacy. They're never gonna put up any statue of me in any hall of fame, much less squabble over whether or not I deserve to be there.

But our man-he's the star of his stories and, great god almighty, what stories they are. Pickens has memories, too, not to mention a fine government pension.

We can probably agree that most CIA tales are meant to be kept secret but he never actually told me that I shouldn't talk about any of this stuff.

Apparently Pickens Klay started his career with the Company right after graduation from Florida State University in the early '60's. He had actually been recruited by the FBI during his senior year in high school at a private Catholic boy's school in Miami. He never really said that the government paid for his college but that's my impression.

His first real assignment consisted of destroying Company files that showed that LSD studies were being widely conducted in loony attempts at mind control and memory erasure. What sexually transmitted diseases had been for the Company in the '30's and '40's, acid became in the '50's and '60's. Pickens got to meet and party with Kesey. He was able to get to dance to the Dead in the park while picking up a healthy paycheck. Uncle Sam didn't invent the hippie but he was on the Development Committee.

The real stories, the real stories are the ones that fit in between. Anticipating a youth culture that might eventually destabilize the culture of Eisenhower's America, the CIA went to work heading off peace and love at the pass. We're talking now about race music, marijuana, disposable income in the hands of kids and s-e-x. Of course the Negro is the worrisome ingredient here. The Negro and the queer. Is "queer" supposed to be capitalized here? I'll check later.

Posted by ronnyelliott at 3:23 AM