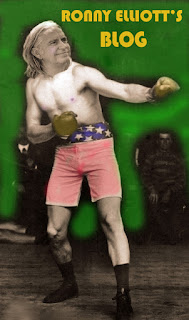 Grad school and the army; Junior League and your book club- that's just stuff that you do. The mumps and a wildfire in the canyon; senseless crime in the neighborhood and a friend's kid's graduation- that's life. You have a sense that you have some measure of control over what you do and you arrogantly consider that your life. At least while you're young. And if you're white. And if you're not poor.

I've known for quite some time now that I'm Ronny Elliott. That's who I am. That's what I do. My job, really, is to just hold on tight and be good. As good as I can. Grandma taught me that, I suppose. The teachers never much liked it but they liked me okay, I guess. I tried to be good. Good as I could.

Today I'm on the radio. Oh, I love that. I get to play songs for friends and strangers, women I love and women I once loved; for the ones from junior high school and the ones who never liked me. It's really stuff I do but it's my life, too.

Isn't it funny that they let me do it? It's like the music that I write and play onstage. I don't know anything about that, either. It's just more stuff that I do. And my life. I get a chance to tell folks that I love them. I do.

Plans- I have plans, I guess. Mostly, though, that's just for stuff that I'll do. Life? I just try to hold on tight. Well, not too tight in my case. Mostly I'll just try to be good. As good as I can.


Posted by ronnyelliott at 2:46 AM