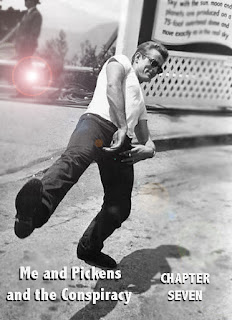 All of the information, gossip really, about spooks and spies and monkeys and public health kept me on the edge of my seat but, honestly, I was mostly just waiting for the next dirty part. The sex. You know.

I never had to wait long. Oh, some days would be taken up with statistics and facts.

Pickens wasn't the only agent who was convinced that the spread of HIV/AIDS came more or less directly from laboratory experiments where scientists mixed various viruses and planted them into human and animal cells.

Which humans? Use your imagination.

Who were the promiscuous ones, conspicuous in our culture?

Movie stars in the '50's. Gay men in the '70's. Was it beneath our intelligence community and our scientific research organizations to intentionally infect individuals with these experimental doodads? The nerdiest of our great big little boys are still making science fair projects.

Our biological warfare program has always been top secret. There is no public record of any of the programs which have studied cancer-causing and immunosuppressive animal viruses adapted for biological warfare and tested on humans. We do know that since the 1950's various branches of the medical, military and public health sectors have been combined for purposes that will remain classified. The U.S. Army has been directly tied to the CIA, the World Health Organization, the CDC and private industry for the better part of five decades. Think smallpox blankets and syphilis experiments in the computer age. Label it "classified" and it all stays secret.

Well, there you go. Now you've got me rambling on about the boring parts.

Without the AIDS angle, though, all we have here is a bunch of narcissistic movie stars fucking each other out in the middle of the desert in Texas. Did J. Edgar Hoover facilitate the party for his own voyeuristic entertainment or as part of scientific endeavor to cure cancer? Maybe it was nothing so lurid or so noble. Maybe it was merely an excuse to keep an eye and a lid on a bad influence on American youth.

Pickens Klay's job had been to determine Elizabeth Taylor's take on these questions before it was too late. Before she croaked. The big fear in the Company was that Ms. Taylor would leave a very embarrassing manuscript with a major publisher.

Posted by ronnyelliott at 3:52 AM