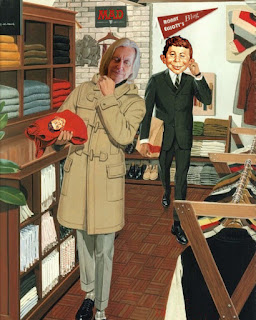 ...Right and wrong. Rich and poor. Black and white. Rock'n'roll. The world, as I define it, only exists in my perception of the things around me. If I look through a telescope, it's entirely different than what I see through a microscope.

Mockingbirds sing me a song and it's different than the song that I hear from Elvis when the needle wiggles in the wax. The fact that Elvis died nearly forty three years ago doesn't stop me from hearing him sing.

As I watch suffering around me, I settle on the idea of looking at everything and listening to everything through a filter of love. Oh, I'm working on taste and feel and smell, too, but I'm having trouble with cabbage.

Posted by ronnyelliott at 7:27 AM No comments: 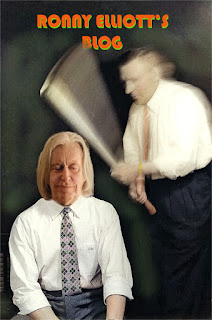 Being a good guy has never been a smart career move. I remember that early on in his career, Elvis made the decision not to smile for photographs. Based on Brando and James Dean, he was convinced that a surly look was what melted young girls' hearts. Seems funny now- all those iconic snapshots of that famous, crooked smirk. I'm thinking that in 1956 he was just having too much fun to scowl.

Well, sir, after fifty something years in the rock'n'roll racket, I'm still smiling. Oh, I'm a revolutionary. An anarchist. There aren't many organizations that I admire, any governments that I support or many country clubs that will let me in.

I still love the music. The music business? Not so much.

Do you suppose that I have failed because I smiled? Is it my lack of regard for the crooks in the industry?

I'm having too much fun to snarl.

Oh, yeah- I love the people. I don't like the war but I love the soldiers. I don't like the government but most of those jackasses are doing about the best they can. I despise Wall Street but I have plenty of pals who don't. Nobody needs to remind me that for every self-important sourpuss with a silver chalice, slinging smoke, babbling in a language that nobody understands- there is a country preacher who works without pay, trying to comfort his neighbors.

Posted by ronnyelliott at 7:36 AM No comments:

Whose Chains, What Chains? 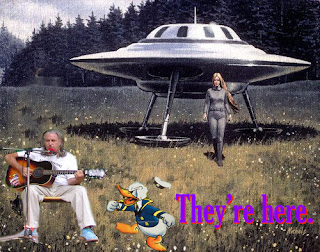 It helps to understand that the ones in power believe that the disenfranchised merely want their stuff. Greed? Not the way most wealthy consumers see it. If wealth is your driving force, you should be looking for bootstraps. Or a sucker. You're probably wasting your time here.

Oh, it's not that I believe in magic. It's all magic. I don't have time to argue with you over semantics and, buddy, it's all semantics.

There's nothing here but love, light and vibrations. If that's not magic to you, we've got nothing to talk about.

Have a good one. Stay safe. Take care.

I don't trade in small talk. I love you.

Posted by ronnyelliott at 2:43 PM No comments: 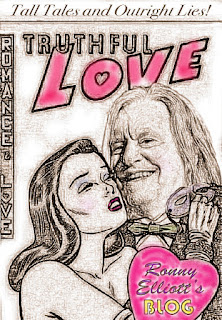 Lately they seem to be showing up with amazing regularity. If you talk too much about the spirits visiting, you'll just bore folks. Keep it up and they'll have you taken off.

It occurs to me now that I should have loved better and listened more. I think I'm pretty good at forgiving but I could have been quicker.

My great gift from the universe has been low expectations. I've never had to live up to much and I have succeeded wildly.

Posted by ronnyelliott at 11:29 AM No comments: 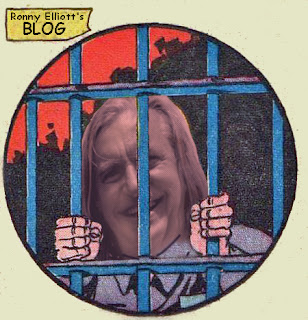 If everybody's life is some kind of movie, mine is one of those B films of the '50's without much storyline. There's gonna be a big rock'n'roll show in town and the city fathers are determined to shut it down. I play me.

Hey, let's cut a rug. Well, musicians don't dance. Truth is, I was always afraid to ask anybody to dance. Time fills all potholes. I read that somewhere.

Most of my luck has been good and I can't remember anything about the rest.

I have never been so proud of what I see in this country right now. If you have a voice, speak up for the ones who don't. They can't outlaw love but they sure can try.

Posted by ronnyelliott at 12:19 PM No comments:

Sliding In To Shortstop 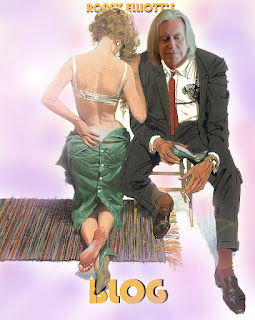 You're gonna think I'm making this up. I don't have the imagination for it.

An old friend was over a couple of weeks ago, digging up some plants for her yard. She noticed two plastic skulls placed very tastefully beside a fancy palm.

"Oh, I forgot that you collect skulls," she began.

"Who don't?"was my obvious response.

Of course I told her that I did. I don't remember being very excited about it. The things are all over the house. It's not so much that I collect them as it is that they have accumulated. You know how some folks don't take down their Christmas lights? I'm more a halloween guy.

The next morning as I went out the side door, I stumbled over a grocery bag, folded over. I assumed that one of my kind neighbors was worried again that the old guy would starve with all the restaurants boarded up.

The clunk when I put the bag on the kitchen counter made me think that it was just canned goods.

No sir! When I opened the bag and peered in, there were two skulls looking up at me. Not plastic, halloween-variety skulls. Two skulls! Real, human skulls.

Last night, just as I was falling asleep, I hear a very odd, but very human voice from the the other bedroom, the room where one of the skulls now "rests".

All night it went on. It seemed like every time I fell asleep, this weird, human voice would start. I finally convinced myself that it was some exotic tree frog just out the window. I had to!

Half way through pecking this out, it began again. I ran into the room, scared to death that I was confronting my Vincent Price nightmare and remembered the landline phone set that someone had just given me.

Thank goodness. The skulls stay. Not sure about the phone.

Posted by ronnyelliott at 2:24 AM No comments: 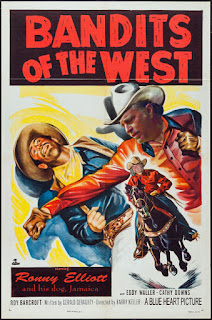 Nobody can lead everybody. I'm convinced of that. I'm an anarchist at heart but I certainly don't preach anarchy. I'm painfully aware that there are lots of people out there who don't care if someone else's baby goes hungry as long as they get to drive a Lexus. Sadly, there are even more folks who don't mind my house burning down if they end up with a new Rolex and a smart TV.

Thankfully most of us fall well within those extremes.

We can't make up for all of the hate and evil of our ancestors. We can change everything that we can agree is unfair in our present culture.

Since we're not going to agree on what is, and what is not fair, we're gonna have to find leaders who are willing to help us find compromise. Leaders who are capable of explaining those compromises to us. Leaders with the compassion to accept the barrage of criticism of all extremes.

The good ones, the kind ones, the smart ones- they are well aware of the image of Jesus on a cross. President Kennedy's brains splattered all over a pink suit.

No bad cop thinks he's a bad cop. No looter doubts that he deserves what he can carry. No elected official thinks that trading stocks based on insider information is any different than taking home a few pens from the office.

Seems to me we have two choices. We can find and encourage the best folks who are willing to sacrifice to lead us in change or we can watch it all burn down.

Pray for peace. Search for truth. Settle for love.

Posted by ronnyelliott at 9:15 AM No comments: