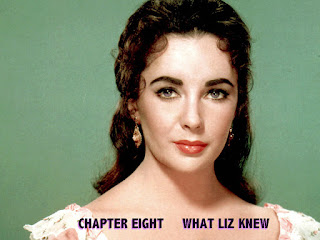 It's one thing to charm Ronny Elliott. Blow in my ear, show me a shiny coin- I'll follow you anywhere. Except for the fact that she was married twice as many times as I've been, I'm guessing that we might all agree that the enchanting and glamorous Elizabeth Taylor was probably more difficult to beguile.

Without boasting, Pickens Klay assured me that he and Liz were laughing and crying together and telling each other their darkest secrets within half an hour of introducing themselves. He never said  how the meeting was arranged, only that they met at Bistango where they nibbled appetizers and drank Kir Royals. Sometimes you meet someone and you're meant to cut your arms and share blood.

He never mentioned who went first. Apparently he let Elizabeth know right from the start that he was sharing everything that he had.

She had signed an oath of renunciation of her American citizenship in 1965 but had been convinced to strike the phrase, "abjure all allegiance and fidelity to the United States of America." She signed another without alteration a year later. She confided in Pickens that she had been terrified for her safety at that time.

Taylor was positive that she was targeted by the FBI and the CIA during this period. He didn't have to confirm these suspicions.

She also knew that there had been Company guys all over the set during the filming of Giant. She knew that things were not like the usual set life. She pretty well knew that Rock was gay. All of his friends knew. Still, that didn't stop her from sleeping with him twice before Phyllis Gates showed up to keep up appearances and to keep Hudson company.

She continued to flirt with and spend time with Rock both on set and with Phyllis during the evenings. By the time that Jimmy and Elizabeth consummated their new friendship, things had gotten weird, even by Hollywood standards.

Elizabeth confirmed for Pickens that Jimmy disliked Rock, but that Rock absolutely abhorred James Dean. Still, she was pretty sure that the two of them slept together before she bedded either one. Dean poured his heart out to Taylor. That's what he did best. Apparently he never told her that he was homosexual but he did tell her that he had made love to more men than women. He would cry himself to sleep in her arms, then ignore her on the set the next day.

Elizabeth had wrapped up her part of production when word came that Jimmy had died in the crash. Devastated, she scrambled to the studio where George Stevens was working around the clock to finish the picture. Stevens offered no comfort and was, in fact, crude and dismissive of James Dean's memory. He still had a movie to finish including scenes that were set for Jimmy to re-do.

By the time that Rock arrived on the set Liz was sedated and helpless. Rock Hudson was in worse shape. Close friends claim that he never got over the loss. Guilt? Maybe. He had wished Jimmy Dean a terrible end and he had been vocal about it.

It was two or three weeks before Rock and Elizabeth began putting together pieces of a very abstract puzzle. There were lots of pieces but you had to force any two of them together.

Now, you probably learned in junior high school like I did that the FBI handles domestic issues that cross state lines and that the CIA deals only with international affairs, their paths and jurisdictions clear of one another. Maybe that's true today. Pickens Klay laughs hard at any such notion when we're talking about the '50's, ' 60's and '70's.

If the scientists in the labs were playing Dr. Frankenstein, the agents in the field were playing Roy Rogers. There are no records of any Giant caper. All of the inside information that Pickens was able to share with Ms. Taylor was from stories that he knew from friends in the Company and in the Bureau. It was a lot.

Pickens was able to assure Elizabeth that the spying on the set of the film had been more kinky than sinister. In fact, if J. Edgar Hoover had not maintained such a crush on Rock Hudson for so long, none of the prying would likely have taken place. Hoover was gaga over Rock Hudson and disgusted by the stories of his homosexuality at the same time. He was, in fact, playing a minor role in the scandal that was being planned at the time by Confidential to out him. The same planned scandal that led within a few months to Rock's marriage to Phyllis Gates.

There was a broader agenda, of course, to the caper. Both agencies were extremely concerned about the coming youth movement. Warner Brothers executives were instrumental in helping set up and facilitate the spying. Those guys were pushing this new thing and fearful of it at the same time. All of their eggs were in the James Dean basket.

The CIA was leading the effort to put together an autoimmune disorder that eventually could be tested in control groups. Gay men was one group that the Company was considering. Pickens could find no link to any such program with the Giant project. In fact he found very little justification for the plot at all. The morals in Hollywood. The coming threat of teenage rebellion. Homosexuality in show business. Those vague notions  and a desire to see 8 x 10 glossies of Rock Hudson's wiener. More 8 x 10 glossies.

Dean's death ended the entire affair. It had pretty much run its course by the time that the set in Texas was closed down.

In 1984 when Hudson was diagnosed with AIDS he and Taylor began spending more time together. Most of their intimacy at this point was by telephone. Both of them were suspicious of the intelligence agencies' role in the spread of the disease but neither of them believed that there was any direct link to Hudson's illness.

Other than the possibility that the epidemic was more widespread in the gay community in the US because of their "experiments" that was probably the case. Lots of the spooks that Pickens had spent time with over the years had Giant stories. Several of the old-timers that he had known early in his career had actually partied with the stars in Marfa. One of them claimed to have gotten blow jobs from Carrol Baker, Jane Withers and Nick Adams. Liz loved those stories. Pickens loved it that she wanted to know if he had seen any of the pictures of Rock's penis. He had not.


Posted by ronnyelliott at 9:53 AM