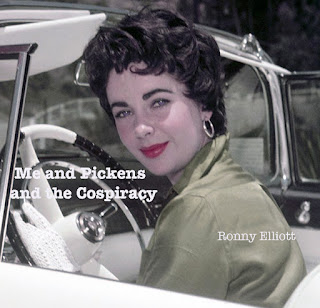 By the time that Pickens found himself across the small round table at Bistango the only part of Elizabeth Taylor's grand beauty that remained intact was the stunning violet eyes. He had grown up part of a generation of young males who groveled at the altar of the American/British starlet.

The charm and innocence of the dreamy young lass from National Velvet in 1944 set many a young heart aflutter and supplied many a wet dream. By the time that she began shooting Giant with Rock Hudson and James Dean in 1955 she was a movie star. She was a grown woman.

Elizabeth grabbed the role of the beautiful socialite, Leslie Benedict, when her pal, Rock Hudson, convinced director, George Stevens, that she would be a better match for him than Grace Kelly. Taylor and Hudson palled around onset and off throughout shooting.

The real fireworks were between Elizabeth Taylor and Jimmy Dean. She was married to Michael Wilding but the heat had been gone from that union for some time. If there's one thing that Liz is known for as much as those lavender eyes, it's her inclination to change men.

Jimmy and Rock were suspicious, more or less, of each other and their own relationship. Rock Hudson was homosexual and the movie industry had long been aware of his real life clash with his reel life reputation.

James, on the other hand, was a much more complicated guy. He loved a good romp with a pretty, tough boy with a great big dick as much as he enjoyed cuddling under the covers, postcoital, with some Warner Brothers beauty, crying over his tragic upbringing. To refer to him as bisexual is to over- simplify a disputed lifestyle.

More than one man has written and spoken of his "great love of my life" relationship with Jimmy Dean. It's hard to compile all the stories from various girls and women who make claim to being his "true love." Stir in the whispers of his interest in several young boys in those Hollywood days and it's  pretty clear that we're never going to have a definitive Dean.

James and Rock were friendly but never close. The story goes that Jimmy didn't respect Rock. They had worked together on Universal's Has Anybody Seen My Gal? a couple of years earlier.He was introduced to Rock again, poolside, at a party at Hudson's rented mansion in Bel Air some six or seven months before Dean was signed for the picture. Rock was the only one naked, cavorting around the turquoise pool with his genitals tucked between his legs. James' sexuality was big and it was kinky but it was never without dignity, at least in his eyes. He frequently dismissed the limp-wrist fop image of the gay man in the arts.

In his eyes, Rock Hudson was convinced that Jimmy's dalliance with bullfighting, motorcycles, promising young starlets and race cars was nothing but an attempt to compensate his manliness.

Was James Dean madly in love with Elizabeth Taylor by the time Giant was wrapping up? We'll never know. What we can pretty well figure out is that Elizabeth was head over heels for him. She had found the ultimate "wounded bird."Dean had a well-deserved reputation by now of convenient romance. With men and women.

Now, Pickens was here with Elizabeth Taylor to find out what she knew. How much she remembered. What she planned to leave behind. The tabloids had been waiting years for her demise by this time.

The only real source left, at least the only famous one, was the fading beauty with the purple eyes and the big diamonds.

How this bunch ever became entwined with the CIA and the FBI is shaky when it comes to facts. Let's just say that there were never any file folders, photos or tapes to destroy. I'm being kind describing the average agent for either agency as a great big little kid. Kind and accurate.

When war and conflict are subtle, intelligence agencies dream up threats. They invent weapons. They develop convoluted schemes and plans. The Korean conflict and the cold war led to some doozies for lots of those great big little kids.

Posted by ronnyelliott at 3:18 AM