Last Of The Rockers 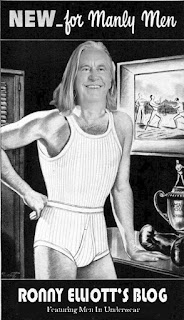 I suppose that I've defined myself by rock'n'roll since I was a kid. Everything that I might call myself sounds pretentious as it echoes in my head. I'm no poet. Oh, I can string together a little alliteration and a few cheap rhymes but if you're waiting for me to swoop in for the kill with a pinch of assonance or a bit of flashy onomatopoeia with sentiment to stir your patriotism, take a seat.

If anything I'm less of an artist and I don't qualify for musician by anybody's standards.

Rock'n'roll was an attitude. The music was incidental.

When a nineteen year old white boy went downtown in Memphis in 1954 wearing pink pants and a black lace shirt with too much eye makeup, that was a punk. That was attitude. You ever been to Memphis?

The music wasn't new in 1956 and the music's not dead in 2018. The attitude went out of fashion. The fact that it was unfashionable then is what sold it to us- the rockers.

Come on, rock'n'roll, save us again.

Posted by ronnyelliott at 4:48 AM