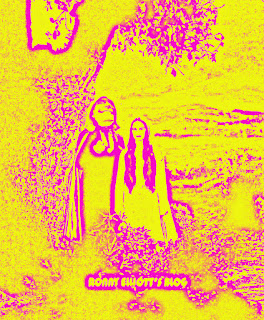 Sometimes I fret that my "career" suffers from a lack of jokes in my set onstage. Fact is I don't know any jokes. I've never been able to remember them. Oh, I could probably come up with a Little Moron tale or two if push came to shove. (Is it politically correct to mention morons these days)?

Knock knock jokes were never funny and I suspect that there is no nostalgia for the genre.

The one that I could get about two thirds through without collapsing in a heap at twelve or thirteen is probably not a smart choice. You remember, the one that ends with, "It spit in my eye and I broke its neck."

I probably have as many songs as I do in order to avoid memorizing other folks' material. Now I'm considering my own brand of comedy to liven things up. Here's what I've got. So far.

Pythagoras and Copernicus walked into a lesbian, biker bar. Pythagoras was older, much older, and heads turned. Really turned. Over the murmurs you could hear Copie pleading with Pythy not to touch him. Not there.

With tears streaming down his boney cheeks Pythagoras climbed to the top of the bar and called out, "I cried because I had no shoes until I met a man who had no raincoat."