I've Been Meaning To Write 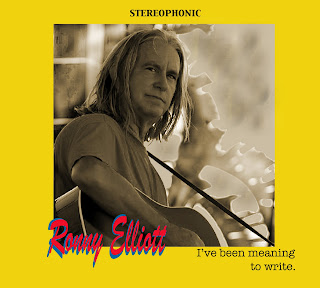 My reviews of records are in drawers and suitcases all over the house. I wrote reviews for the Tampa Tribune and the old Tampa Times for years. I've never reviewed a release of my own. Kinda' like voting for yourself and getting caught, isn't it? Who cares?

This is the first thing that I have done in five years. Let's see, what do I have to write about? Don't get me started. Oh, too late.

Two wives left, the dog went lame and I was broke. Really broke. Yeah, I was out of money, too. Just to make sure that I didn't miss the biblical slant of the excitement, my doctor told me that he thought I was dying of a weird, rare blood disease.

Well, here we are. I'm poor but I'm happy. I'm alone but I'm alive. The dog is fine and I love her. I'm dying but not of any weird, rare blood disease. I'm dying at the same rate we all are, waiting to be hit by a bus. I may not be all the way back but life sure looks rosy.

This thing opens with a little ditty, My Blood Is Too Red. Guess I already let the cat out of the bag on that one. It's another one of those RE tragedies that I wrote in advance of the sad events that it documents. "How does he do it?" you ask. I don't know but i'm tired of it.

Driving Back In Time follows. I had actually written this for a BAAMO compilation a couple of years ago but had not gotten a chance to do it the way I thought it should be done. I guess we all look back to something. If you look closely enough it may have sad written all over it.

Depending on capital D versus lower case d, the next tune, Goodnight Captain, is dreamy autobiography or the fictional rambling of some guy with too much time on his hands, too much love in his heart and not enough good sense to come in out of the rain. Rebekah Pulley's piano kills me.

As I mentioned in an earlier post These Dreams is probably my favorite song I've ever written. Someone told me the other night that she cried when we played it. Me too. They don't seem to get much better. Not quickly enough.

Fortunately titles can't be copyrighted. A Doctor And A Lawyer was left for me on my desktop. Intentional? I don't know. Unfortunately I didn't have to write a story, just see that it rhymed a bit. Sad.

Handsome Harry The Hipster is just the short version of the story of Harry "The Hipster" Gibson, one of the unsung heroes of rock'n'roll and hip culture. He was the real deal.

A young, talented songwriter named Jason Lutrull sent me something good called Something Bad. I glanced at his e-mail and started to trash it before I even listened to the mp 3 attached. If there's one thing that I have it's plenty of songs. For some reason, though, I listened and thought, "Yeah, I should be doing this." Turns out to be lots of folks' favorite track on the cd. It surely fits the theme and it sure is fun to do. I look forward to meeting Jason and writing something together soon.

I heard Rebekah do Nobody's Cool Any More and knew that I had to record that song. I can't really do it justice. It is her song. Really her song. I thought several years ago that she was so good that she couldn't get any better. She keeps getting better.

I wrote the beginning of Boys In Hot Rods for her to sing. I hear it as a big, melodramatic girl record. She helped me finish up the lyrics but never got around to recording it. It's on here because I can't throw anything out. I look forward to her doing it up right at some point.

In Memphis I mentioned that we should write Jackpot City. She wrote it before I could get to it. Again, it's hers and nobody will ever do a Rebekah Pulley song like Rebekah Pulley.

I'm not sure where Heart That Can't Be Broken comes from. I worry that I don't know one when I see one.

I guess Women Leave is nothing but an exercise in self pity. I apologize for having gotten so good at it. I'm pretty sure that I'm finished. No, I'm finished.

The hidden track is the most fun and I'll never get over Little Miss Dynamite.

Overall, the thing is not much good to dance to but it will serve for drinking purposes. I give it a six and a half. I hope no one is hurt, offended or insulted by my version of my history. I try.