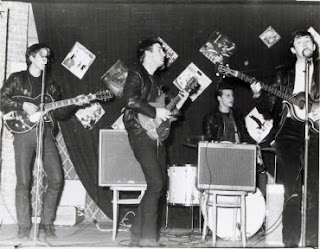 Yeah, where would we be without the Beatles? They changed everything for a whole generation of us. They weren't even on the radio in the states when I figured out that my life was taking a turn. I saw a tiny wire article in the Tampa Tribune about this four piece beat group from Liverpool that was shaking up all of Europe. I stayed on the lookout. Soon Jack Paar ran a short clip of them. I was hooked. My junior year in high school, 1963-'64, was the turning point in my life.

Oh yeah, rock'n'roll was my life and had been for a long time. Since I was eight or nine. Elvis and Chuck Berry and Little Richard were gods, though. I idolized them and copied their hairdos and styles but never considered that I could do what they did. Maybe Curtis Lee or Benny Joy or one of the B list rockers but I wasn't born into royalty.

Then these four white guys writing a lot of their songs and looking like some kid you knew from physiology class if he had washed his hair came along. I still get woozy thinking about it. I shampooed my hair, grew it over the top of my ears and never looked back. Well, not for long.

It wasn't just the affirmation of the rock'n'roll. They preached so much of what I believed from Sunday school and lots of the morality that my grandmother had instilled in me. In the second round they mouthed off about peace and war, vegetarianism and love. Yeah, love. That's all you need. I love the Beatles.