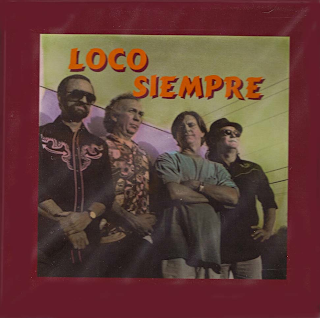 We hadn't been playing much for some time. Two or three times Harry had approached me and asked if I wanted to start a band. That's a question that you don't want to hear when you're a recovering musician. Of course I would tell him yes every time and he would proceed to tell me that he didn't want to do it.

This time seemed different, somehow. He mentioned that David Lane and Billy Artlip wanted to be involved. Harry suggested that we get together once just to see what would happen. I had known Billy and David for a long time. Not well but for a long time.

Well, to tell the truth, we smoked some dope. I hadn't done much of that for a long time, either. I misunderstood something that David said in the haze as "loco siempre." Honestly, I think we started the band just to use the name.

We never worked much. Nobody hired us. We had some adventures. Some misadventures, too. There was the night in Tallahassee at F.S.U. when Harry played in his sheer harem girl outfit. It might have gone better if his guitar strap had been longer. Well, the officer didn't just arrest him. He called in reinforcements first. That was a show with our old pal, Col. Bruce Hampton. Bruce wasn't surprised.

That thing, the band, not the harem girl suit, finally unraveled. That left me, finally, as "Ronny Elliott." For that I'm grateful. It had taken me years. I had never wanted to be up front.

Billy has gone on. Tonight we'll get together with our old friend, Spencer Hinkle, sitting in on drums. He's the best drummer in the world. We won't be too good, though. Never were. We're playing to raise a few bucks and a little love for our pal, Dusty Durst. He's been diagnosed with ALS, Lou Gehrig's Disease.