Birmingham By Way Of Attapulgus 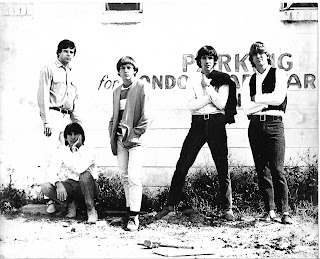 Oh yeah, we were hotshots. We finished up our show at the Lakeland Civic Center and headed out in our Econoline van for Birmingham. The Soul Trippers, 1966. We were pretty sure that we were great and we were getting a little bit impatient waiting to become famous.

Spencer was driving and as we approached the edge of Attapulgus the right front tire went off of the shoulder of the road. When he pulled the steering wheel to get it back we began to roll and flip, sideways and end over end. We knew how far we rolled because as we pulled ourselves from the wreckage we could see a little bump about a hundred yards back down the highway. It was John Delise, our singer.

We were sure that he was dead. The sun was just coming up as we ran towards him. When we got about halfway there he stood up and began to run towards us. Everybody was alive. Miracle.

The excitement was just beginning, though. We got back to the smoldering heap just in time for the flames to begin showing. As we began to throw all of our musical gear out onto the side of the road it began to rain. Could it get any worse? Yeah, it got worse.

A sheriff's car pulled up and, straight from central casting, a gigantic hulk with a shiny star on his badge waddled up and asked calmly, "What's the trouble, girls?"

Well, sir, they took us into the Attapulgus jail and made us some coffee. Pretty soon we were friends with half the town and feeling the celebrity love that we thought we were owed. Everybody was cut up and bruised but we were glad to be alive. Three of us still are.

There are parts II, III and IV to the story, too, involving getting to Birmingham, fighting our way out of the crowd and mononucleosis. I'll save those for another time.