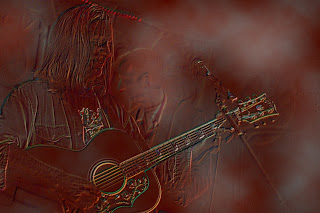 Well now, I've been left by more women than Agnes Scott. I've been turned down, stood up, pushed 'round and took. I have failed at all sorts of endeavors and managed to wind up broke.

That's alright, that's alright. I have lived with the joy of rock'n'roll. I've listened to stuff to make the angels blush. I've worked with my heroes and I've had the glorious joy of being exactly who I am.

Folks want me to tell the stories about the famous ones. Yeah, I understand. Sometimes, though, it's uncomfortable. I have friends who drop names and they're good at it. I'm not. Just because somebody important walked by me doesn't say anything about me. Well, I suppose it says I was in a room.

Last night I watched the Joel Tatangelo Band. They may never be famous but they should. They know where the magic is. When I was a kid my mom took me to see the Skyliners all the time. There was never better music, never joy more pure. They never made any money. Not for themselves, anyway.

That "deal with the devil" thing- I know all about it. My mom signed the papers for me when I was about eight years old. I couldn't do it legally.