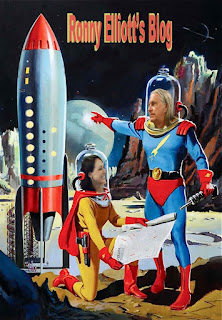 The workman walked through the front door this morning and immediately declared, "Well, hello there. I'm friendly."

Oddly, I pretty much knew what he was talking about. He wasn't the first. Of course I had to ask to make sure.

"What does that mean? Who are you talking to?"

The junk man hauling away the debris a few weeks back told me the same story. He said that when he walked into the back bedroom a voice very clearly called, "Mark." He said that it was a man's voice and seemed very kind and friendly. He told me that only once before had he experienced anything similar and that the other incident was unsettling and had not seemed friendly at all.

This time, it's not my house. I'm trying to help Leonore get her house ready to move back in to and she doesn't want to hear it. Not my fault. Not my house.

Let me mention that Mr. Hill, who lived in my house, seems to hang around in spirit, too. Also kind, also friendly.

I mentioned that I don't believe in ghosts, right?

Posted by ronnyelliott at 5:57 AM