"One Cop In Wentzville" 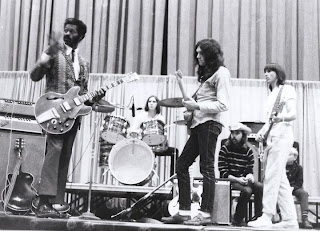 Working with my all time hero moved pretty quickly from the thrill of a lifetime to something in the nightmare category. Chuck Berry was a great guy when he chose to be. Often he made other decisions.

The last time I played with him, though, was a highlight of everything that has passed before me. He had made us an offer that we couldn't really refuse through the promoter. We packed a borrowed van and headed for Miami. The show was at the Jai Alai fronton and the opening act was the James Gang.

We had grown more or less accustomed to Chuck's uneven performances. Oh, the good ones were always special. The lesser shows always had more predictable material and less duckwalking. This evening was special from the opening chords of Nadine.

The set lasted two and a half hours. Chuck ranted, he raved. He dropped to his knees to recite poetry. He was on fire and the young crowd stayed on their feet throughout the workout. He bragged on the Mike Douglas Show the next week to John and Yoko that he had just played the longest set of his career.

At the little reception table a sweat drenched Dr. Berry kept up the party mood inviting us to come visit at Berry Park. "There's only one cop in Wentzville and I've got polaroids of him!" he shouted. I thought it was just a little tasteless joke. Of course several years later I realized from assorted news items that it probably wasn't altogether a joke.

I sure am glad that we ended our run with the greatest living American on such a high note. He's still my hero.


Posted by ronnyelliott at 2:03 PM