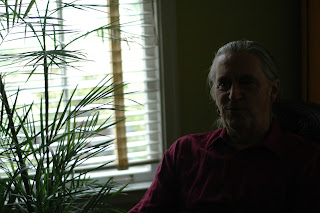 Another one of those concepts that I have no use for, writer's block. Then again, I have nothing to say. Cat's got my tongue.

I remember reading an interview with Chuck Berry when I was a kid where he turned aside a compliment about being the genius who invented rock'n'roll by insisting that he had only written a couple of songs. At the time I thought that my hero was just being humble and shy. Of course I found out over time that Chuck is neither humble or shy.

It took me years to figure out that I've only written two or three things. Then I write 'em again. Sometimes you just don't have anything to say.

Posted by ronnyelliott at 11:16 AM