Sweet Gene- What They Remember 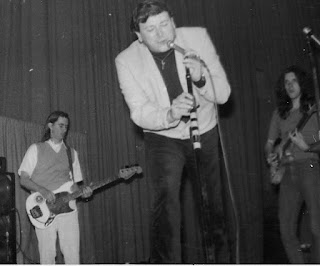 There's a song called "Sweet Gene Vincent." He was, in fact, a very sweet guy. That's the only side of him that I ever saw. This shot is of me and Gary Dobbins onstage at Curtis Hixon in Tampa with him on the first night of a short tour. He was shy that first day. He told us that he didn't really play guitar, then took Gary's telecaster and amazed us as he  tore through his song list, showing us what he had in mind.

The airline had lost his luggage so he was without his beloved "leathers." He just didn't feel like a rock'n'roll star out there in that mustard colored coat and black bell bottoms. By the next night the missing suitcase had caught up with us and Gene took the stage in his proper black attire. A different person, he tore the walls down.

There are lots of stories out there about guns and craziness and Gene certainly had a taste for the whisky. When the dust settles, literally, it's all about what they remember. Be-Bop-A-Lula.

Posted by ronnyelliott at 10:38 AM