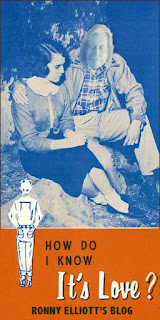 All my life I've heard the name, Joyce Howard. He was my Aunt Jo's suitor before I was born. Of course she didn't speak of him often. She was happily married to another man and they raised my cousin, Jimmy, in Birmingham.

Maybe this vivid memory of a man who I never knew is due to his name. I don't believe I've ever known a man named Joyce. Coulda' been a great Johnny Cash song.

My mother and my Aunt Marion would talk in reverent tones and almost swoon when they talked about him. Never in front of their sister, though. At least not if my uncle was around. They had kept old, yellowing photographs of him. I seem to have a reasonable memory of what he looked like. Probably not at all accurate.

Every now and then roses would arrive for my grandmother on Mother's Day. Joyce Howard. Occasionally he would drop by with a Whitman's Sampler for her, one of the big ones with three layers. Hillbillies love that stuff.

She talked about him with the same tone usually reserved for Jesus or her two sons, Morgan and Reid. Or me.

Aunt Jo has been a widow for forty years or so now. She's about to turn one hundred and one. I called her about a year ago to ask about Joyce Howard, just to make sure that I hadn't embellished the memory in my mind.

It was obvious immediately when I mentioned the name that I had not even been able to fathom the level of affection that the family held for Joyce Howard. I think I do now. I don't think I ever saw him in person. I'm not sure.

I've always had some weird heroes but this one came with such beautiful references. Willy the Shake had his Romeo and Juliet. I'll always have Joyce Howard.


Posted by ronnyelliott at 9:41 AM