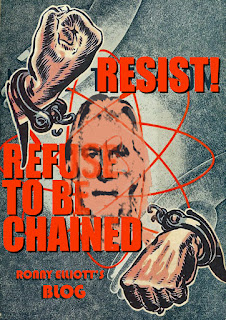 The fire just keeps burning brighter for me. Hotter. I know now what I should have known at eighteen  or twenty. I've just about learned to rock'n'roll. Good timing, huh? I've worried since I was nine years old about the inevitable demise. Here it is. Ha! Makes it better.

A year ago nobody could have convinced me that I lived in a racist, sexist, bellicose culture. Oh, I have certainly been aware that we had a long, long way to go for women's rights. For anything approaching racial equality. I have wrung my hands since I was a kid about one war after another.

Now women face a threat to every gain established over the last century while Muslims move to the front lines of the battle for freedom. War is perpetual and the lines blur as to names.

I have no plans to leave here until this place is fixed.

If they think that they can destroy love with hate, they're in for a sad comeuppance.

Posted by ronnyelliott at 6:34 AM