Keeps Going Up 'tii It Don't 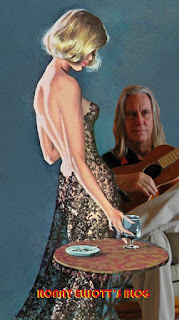 When I was a kid the great race car drivers at Indianapolis always said that if there was a wreck on the track in front of them that they drove straight at it, reasoning that at one hundred and fifty miles per hour or so that that was the least likely place for the cars to be when they got there. I doubt anyone gives any such advice now. By the time you see a wreck in front of you now it's in the process of becoming a memory behind you. If you're lucky. One hundred and fifty miles per hour is nostalgia.

If you're a young musician, I've got advice. See that wreck up ahead? That was rock'n'roll. Drive right at it. The New York Times recently wrote that rock'n'roll was dead. After wringing my hands, worrying about the inevitable demise since I was a kid, it just quietly gave up the ghost without many of us noticing.

Oh, there will be vultures peddling pop music, passing it off as "rock," for as long as young folks have disposable income and old fools are nostalgic. There are certainly working musicians out there who can still rock'n'roll, too. There's a millionaire from New Jersey and there's a fat man in New Orleans and a mean old guy in Memphis who come to mind. There's also the Georgia peach who helped start it all but seldom leaves the penthouse suite in Nashville. What time is it? I suppose that the Rolling Stones will be announcing a tour shortly.

Rock'n'roll was more than three chords. It was the magic that freed us all. It was a salve that brought black and white together in a mean land where the government couldn't do it. It moaned and complained like the blues before it and it bristled with joy in the same way that jazz had done. Rock'n'roll preached against hate and war and inequity like the great folk music that came before it. The first wave, Chuck, Little Richard, Bo and Fats and the boys were quickly joined by Elvis and Buddy and Jerry Lee. America couldn't contain it. It belonged to the world. The Beatles gave Great Britain its first full breath since the end of World War II. Jimi had to go over and come back to these shores to be noticed.

Let's not make this a sermon. I don't want to blather on about the Twist, the Summer of Love, psychedelia, folk rock, Mr. Dylan and all the other heroes and phenomena only to leave out your favorite. The one that changed it all for you. By the way, did I forget to mention Motown, girl groups, soul music and MTV? See?

The music business is hell. That's what happens when you mix art and business. Music, though, that's a different story. There couldn't be a better time for opportunity. While you're figuring out who you are and developing the one and only "you," the world waits. Not patiently. We could use a little "saving" here. Nobody paid any attention to that Times' obituary.

My life has been magic. I know that I've overused that word but that's the only one that will do. Who knows what they'll call it this time around. Who cares? It's none of my business but I want that for you, too.


Posted by ronnyelliott at 4:32 AM