It's All About Me 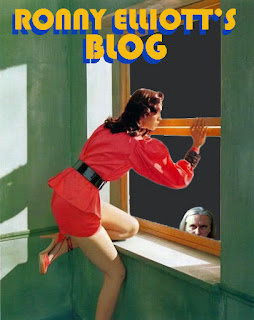 Sometimes I have trouble taking my own side. My expectations are too high. My male role models were from Father Knows Best, Ozzie & Harriet, Leave It To Beaver. Now Ward and Ozzie and Jim have gone on to their rewards. I've got DVD's and re-runs, though.

I wanted to be a juvenile delinquent until I heard about switchblades and zip guns. I got sent to the dean's office regularly in my junior and senior years in high school. I was the only kid in school with"long hair." I suppose I was the only one in town for most of that time. That lasted until the Beatles went on Ed Sullivan.

It was rough for the dean. Worse for the principal. I was no social threat. None of us considered what was coming. Once or twice I dated the principal's daughter. She never had any interest in me. I was just a ride to the Surfers' Club.

Posted by ronnyelliott at 12:22 AM