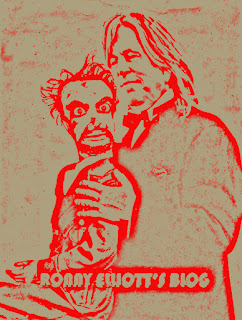 My knowledge as a child came from World Book encyclopedia and Photoplay in pretty much equal measure. I knew from movie magazine gossip that all famous movie stars had psychiatrists. It was no great leap to conclude that movie stars were all crazy. I liked that. Still do.

Of course it never occurred to me that I would ever have any need for therapy myself. Oh, I considered "movie star" as a career option but it was down the list behind race car driver, rock'n'roll star, juvenile delinquent and air force pilot in consideration.

Somewhere down the line a wife convinced me to go together for couple counseling. It was obvious that the plan was for the therapist to pronounce me crazy. That would allow us to change things to make for a happy household.

The venerable doctor did, indeed, pronounce me "crazy." No surprise there. When she told my wife that she was crazy, too, all hell broke loose. Tears flowed. After a few sessions I was thrilled. It dawned on me that movie stars have therapists because they can afford them. Movie stars are rich. Heck, everybody's crazy. We could all use counseling.

Eventually we had to change therapists. My wife decided that the good doctor liked me more and would always take my side. Well, in fact, the doctor did like me more. I answered questions. I told her anything she wanted to know. My mate sat stiffly, quietly praying for the forty five minutes to end, saying as little as possible. Frequently sobbing.

The pattern continued through two more therapists. Finally one pronounced us "well." He informed us that we were all set and didn't need anything else from him. We were divorced several years later.

I've repeated the pattern with more than one woman since. I'm grateful for the experience, the help. If I could afford it, if I were a movie star, I would have my own psychiatrist. I'm crazy.