The Promise Of Punk 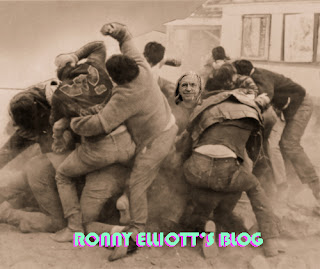 Seems that every time rock'n'roll goes on life support something out of left field brings new life to the old girl. By 1974 big studio budgets and self important "singer-songwriters" threatened all that seemed dear to us. Malcolm McLaren, Seymour Stein and a bunch of other opportunistic vultures began shooting fish in barrels. Looking back, I'm surprised that the London Philharmonic wasn't brought in to sweeten some of the Pistols' tracks.

Jerks in suits with comic book dollar signs in their eyes have always rushed into the temple to scoop up the gold when the 4/4 beat rolls.

The first reference to "punk" as far as we know comes from a Lester Bangs review of ? And The Mysterians. Good call.

Elvis was a punk. A sweet kid. An innocent hillbilly who loved his mama but a punk, nevertheless. Jerry Lee was a punk. Gene Vincent was probably the ultimate punk. Over the years we had Little Willie John and Johnny Cash. We went from Little Richard and Hank Williams and Dion to Dwight Yoakum and Ike Turner.

The world of rock'n'roll was built by punks just as surely as the white house was built by slaves. Something about a suite at the Pierre and room service tends to change all that. As much as ol' Keith loves to reminisce about shooting out the lights to escape a drug deal gone wrong, he's been a privileged millionaire who doesn't have to carry his own amp for half a century. We're never going back.

Now I find myself an old man. I loved my mom, too. I dote on an old dog and a blind cat. I'm a punk. Always have been.


Posted by ronnyelliott at 9:32 AM