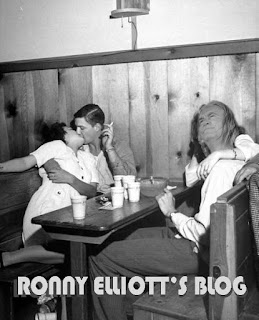 At some point you're an amateur, a beginner. You have to start somewhere, as they say, learn your craft. There isn't much of what we call "art" without copying, borrowing, stealing. After all, without a frame of reference there is no connection with an audience. Maybe it's nature. There are some magnificent colors on a peacock, a pigeon. I've heard some beautiful melodies from mockingbirds in something of a pythagorean scale.

There's no cubist art without Picasso and Duchamp and Gris and Braque breaking new ground. Of course those bozos don't get tagged "genius" without lifting all the good stuff from African art. "Primitive," indeed.

Bob Dylan has influenced more writers of my generation than Shakespeare, Irving Berlin, Hemingway. Of course he got it from Oklahoma hillbillies, early rockers, Japanese poets and Scottish folk songs.

It all comes from somewhere. Art is like language, like love. There are rules, forms, patterns. If you're gonna make art, you're gonna have to break some, change some. Ask Jack Kerouac. Ask David Amram. Ask Charlie Parker.

Years ago I accompanied a friend trying to place her photography with a fancy San Francisco gallery. The proprietor was so kind and such a gentleman. He pointed out the Rolls and Bentleys parked along the sidewalk. He explained in a a kind and patient manner that his business was "selling very expensive autographs." It's good to know your field, to understand your customer.


Posted by ronnyelliott at 3:25 AM