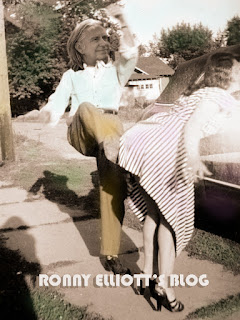 Nothing is worth much if you can't share it, right? So why are we jealous, selfish? Once I took a class called "Idea Of Utopia." The University of South Florida actually had an idea department. Ah, the good old days.

I don't know much and the little that I do know, I should probably keep to myself. Yeah, I can still rattle off Elvis' army serial number. I would be willing to bet that Elvis didn't remember it by 1960. REdwood 73314. That was my cousin, George's telephone number when he was eleven years old.

Bar bets! That should be my calling. It's not brain surgery but at least I don't claim to have taken a hammer to my mother. I certainly was not offered any scholarship to West Point.

I've scooped mud from the hulls of barges, picked watermelons, swept floors, written an automotive column and worked for the government. Oh, and I've played rock'n'roll.

My whole life has been one long episode of Bad Lip Reading. Really long.

Posted by ronnyelliott at 2:01 AM