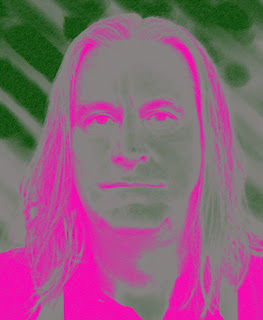 Whoa! The earth was tilted and I could feel it. Of course the earth is tilted on its axis but we don't detect it because of gravity. Suddenly I could see the curve of our atmosphere and I noticed huge patterns of concentric circles everywhere I looked. Man!

A fine start to another day at the office. I was in Atlanta to check out the Hampton Grease Band for my boss, Phil Gernhard. I had brought my friend from home, Gary Dobbins, and we were staying at his girlfriend Peggy's apartment. Peggy had given us each a three way tab of synthetic psilocybin to brighten up the day in Piedmont Park. I'm gonna tell you, it worked.

By the end of the day I had learned more than any ten years of school could have ever taught me and Gary was flat on his back, surrounded by self-appointed gurus, begging to be taken to a hospital. To say that the trip and the trip were better for me than Gary would be a wild understatement.

Well, I've been back to Piedmont Park. The earth is clearly tilted and the patterns really exist. In fact it's hard for me to ignore them. Bruce Hampton is a good friend of mine and Gary has gone on. I don't know whatever happened to Peggy.

Trying not to sound like any kind of advocate for drug use I must say that this adventure changed everything for me. Forever. The power of the mind and the fragility of the heart make us who we are. If we can just keep our hearts and our minds open, it's a beautiful, beautiful world out there.

It's all about the love.


Posted by ronnyelliott at 9:02 AM