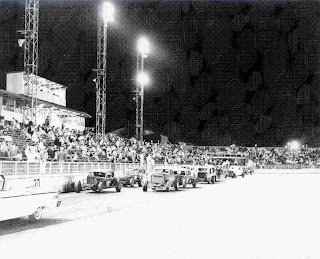 Uncle Morgan used to take me and my cousin, George, to the stock car races at Phillips Field most Saturday nights. It was a quarter mile asphalt track around the football field used by the University of Tampa. At the west end of the oval was the Hillsborough River. If a driver missed the number one turn it was into the dark, dank drink. Man! That's show biz. Buzzie Reutimann transformed himself into star. His '35 Chevy 00 was iconic. While those other hillbillies sported greasy t-shirts Buzzie was resplendent in his red satin shirt that his mom had tailored for him. Did I mention that he started when he was fourteen years old? Of course he learned it all from the old man. Emil, his dad and the proprietor of Reutimann Chevrolet in Zephyrhills, was always dapper in his blue satin shirt. His 00 with "Go First Class" painted on the roof ran in the A class.

My rock'n'roll sensibility comes as much from the Reutimanns as from Elvis. I was inspired by Audie Murphy, Gorgeous George, Y.A. Tittle, the Von Brauners and Annemann. Give 'em their money's worth. Leave puddles; yours and theirs.

Posted by ronnyelliott at 10:36 AM