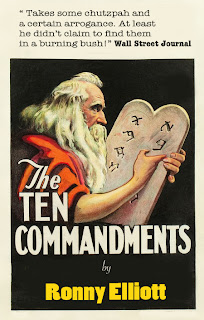 Yeah, my Ten Commandments are around here somewhere. In fact, I updated them and wrote another ten some decades back. I think I've probably published them here before. It's obvious to me by now that anyone who puts any thought into right and wrong knows, instinctively, right from wrong. Beware of anyone who wants the power.

The first time that a wife ever dragged me to a therapist it was so that the issue of my craziness could be made semi-public. Well, I already knew that I was crazy so we could have saved a few bucks. When the nice lady informed us that we were both crazy the tears began to flow. Didn't see that coming.

Now I'm going back to see the therapist next week. If I could afford it I would probably go on a Woody Allen schedule. Looks like once every ten years isn't working so well. I'm pretty sure that mental health is just around the corner. Unfortunately death by old age is nipping at my heels.