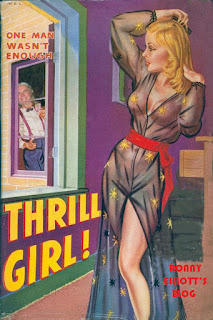 Left to my own devices I tend to hear in mono, dream in color, think in rock'n'roll. When I notice that the New York Times and the Financial Times and Esquire are all on the hunt for authentic I know that we're looking at a trend.

Oh, this isn't new to Generation Y. I suppose that we all need to think that we're different from the ones who came before.

On the white side of the fence, the Carter Family was authentic. Nobody was ever going to pretend to be a hillbilly. Jimmie Rogers and Hank Williams were, too. Dying young enhances your odds. Elvis was authentic until we got into 1956. Then he became the first Elvis impersonator. Good one, too. The Beatles were maybe a little less authentic because of Brian Epstein's heavy hand but we probably would never have seen them without his influence. You get a little too authentic and it's a risky deal.

My favorite rock'n'roll quote is, of course, attributed to the Killer: "Hell, they would've had a fit if they had known she was really only twelve!"

Tiny Tim. There's another one. Of course by the time of the wedding on the Tonight Show we had managed to turn that sweet soul into a parody of himself.

It's funny but the Tonight Show had the power to do that. Little Richard had probably been the poster boy for authenticity in the early days of rock'n'roll. Don't forget that little Bobby Zimmerman had wanted to be Little Richard before he decided he wanted to be Woody Guthrie. That embarrassing, flamboyant pouf shouting, "Shut up!" to Johnny Carson wasn't my Little Richard.

Now I've opened a can of spaghetti, huh? Woody seemed to try his best to be what they wanted. Authenticity just seemed to get in his way. Most of us would probably never have known his name if the aforementioned Bobby Zimmerman hadn't concocted the stage name, Bob Dylan, and set out to steal Woody's act. Supreme talent got him through long enough to become his own eccentric, our eccentric, the voice of a generation.

Sometimes the talent and the authenticity go hand in hand. I'm thinking of Van Morrison and Jimi Hendrix. There are plenty of examples of the talent with no authenticity whatsoever. John Fogarty wasn't born on any bayou.

Most of my personal favorites are the ones way off the authentic scale. No Col. Parker or Brian Epstein was ever gonna touch Nervous Norvus or Bruce Hampton or Screamin' Jay Hawkins.

I'd change my name, get a new hairdo and move to Nashville but I'm too lazy.

Posted by ronnyelliott at 2:49 AM