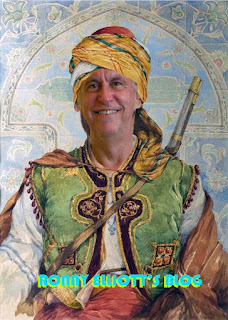 Hey, this land was made for you...

Over a long lifetime I have never felt more the outsider. Funny, nothing seems sad about it this time around. I made a promise to myself that there would be no politics here. I don't have the stomach for the division, the quibbling, the hate.

It would be impossible, however, not to notice that Donald Trump raises hope and pride in the souls of more of my tribe than President Obama. You know, "We gave the colored guy a chance and just look at the mess we're in. We need to get back to some bullying, some firing, some bluster."

Nobody's gonna trick me into hate. It does not make me proud to say that I'm not proud of my country. When the conversation turns to pollution, infant mortality, imperialism, income inequality, health care, violence or racial prejudice I have to leave the table.

Oh, I know that good will prevail. It is just disappointing to me to have little hope that it will be done through government and/or religion. Bad guys now own most of that.

We watched the Soviet Union crumble and collapse. There is no "revolution" against nuclear weapons. There is decay and collapse. This society with homeless folks in front of the hedge fund offices can't be maintained by giving us a new I phone every other year. Not indefinitely.

What do we do in the meantime?


Posted by ronnyelliott at 9:34 AM