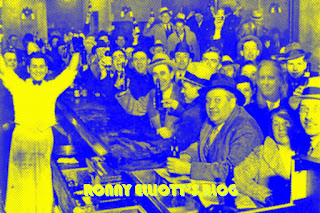 What about all the racial stereotypes that are valid? I mean, I've seen James Brown and I've seen Riverdance. I don't wanna be tacky here but I know who my heroes have always been. Presidents, rock'n'roll stars, baseball players. Oh sure, I've got the odd Don Garlits, Elvis Presley, Jimmy Carter and Donald O'Connor. On the other end of the spectrum, however, I'm weighed down with Duke Ellington, Willie Mays, Bill "Bojangles" Robinson, Little Richard and Barak Obama.

If that's not irreverent enough for you, let me go further. Gandhi and Buddha and Eleanor Roosevelt were fine but they were no match for Lassie, Trigger, Wolfgang, Angel, Jamaica and others, too numerous to list here.

Oh, I'll never be president. Who am I kidding? I'll never get a date.