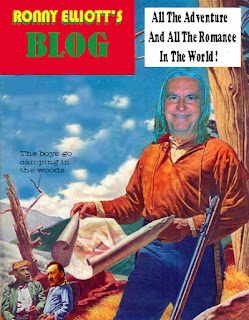 Suddenly it's not going the way it's supposed to go. Donald Trump is leading the pack. What a pack, too! We're not evolving so much as we're just squishing out from under the boot heels of an arrogant, oppressive ruling class.

The pundits blather non-stop on the financial crisis in Greece. They like to point out that if the citizens decide to pull out of the European Union, the country will have no choice but to merely print currency to keep afloat. Do they think that we don't notice that all countries do exactly that? Just what backs the currency in this grand country? Our good will and good credit. Now. Back to the clown car with Mr. Trump at the wheel. He goes bankrupt on a regular basis, then denies it. The folks seem to be liking his message if not his hair.

Who were the last ones to see that newspapers were through? Why, the newspapers! Who claimed that the music industry was merely transforming and updating? Why, Clive and the boys!

Unfortunately, the last crooks in the temple usually loot and raid before they skedaddle but it looks like they may have little to run off with other than that green paper with old dead white guys' picture on it.

What an exciting time to be alive.

I've got a hot market tip for you before I go: love. Yeah, that's the only true currency. Always has been.


Posted by ronnyelliott at 3:38 AM