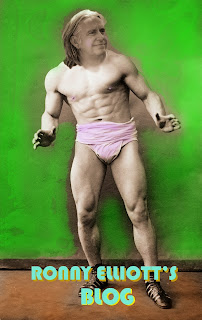 Ankle-deep in mud I worked to get under one of the big circus tents where music was blaring. It was August 13th in 2005 and we were barely into this little tour that was to last about a month. Terry Clarke had put his idea for a romp through England, Scotland and Ireland with me and his old pal, Wes McGhee together and convinced, somehow, the two of us that it was a sound concept. The Unholy Trinity he called it.

Here we were at a festival for about 50,000 music fans somewhere near Inverness, Scotland. The Belladrum Tartanheart Festival.

We were just getting news of tour changes on Terry's phone when the skies opened. My biggest concern was my new yellow shoes and the aforementioned mud.

A radio programmer with a brogue so thick that I couldn't understand anything he said was trying to get Terry to bring us over to meet the couple that his station had flown over from Ireland as contest winners.

Well, they seemed to be lovely folks. George and Manda Craig. From Coleraine. I honestly questioned their sincerity when they proudly told us that they had come just to see the three of us. At least I think that's what they said. Their brogue was thicker than the dj's. They offered to put us up at their home while we were doing the dates in Northern Ireland.

Within the hour everything Irish was in pieces. Money was wrong, accommodations were gone and expenses were rising. To cancel the Irish portion of the tour would have been a disaster. Especially for me. It would have left us with a two week hole in the schedule with no work and no place to stay. We had started in Newcastle and then started up through Scotland. Ireland was the middle piece of the puzzle before we headed back through England, ending the tour with a show at the Borderline in London before I headed home.

Luckily Terry had taken George and Manda's cell phone number. The invitation had, indeed, been sincere and Terry got directions to their home in Coleraine.

We had one more show to do in Scotland. We played in this tiny, magnificent theater in the lighthouse keeper's cottage in Dunnethead, Caithness. There are no people there. Heck, there are no trees there. This is the furthest North point in Scotland. No, no, not those tourist spots that they show you. This is way up there. As in, "Is that Iceland?"

Well, as usual, I digress. That's another blog.

We packed all of our gear and luggage into Wes's Jaguar so that we could take only one car on the ferry to Port Stewart. We left Terry's car parked in the public lot, packed to the ceiling with all the rest of our belongings, and hoped for the best.

The drive from the ferry landing into Coleraine was a geographer's nightmare. Terry yelled out directions from some 1950's roadmap while Wes tore through forests and fields on mere ruts that looked to me as though they might never have felt the weight of an automobile.

We arrived at the Craig's lovely cottage just after dark. Manda had kept dinner for us. Let me say here and now that I will never have better friends than these four, Terry, Manda, George and Wes. I guess we stayed with them for about a week. A fine week it was. We had plans to stay in Belfast the first night that we were playing there. Oddly and sadly, the "troubles" had flared that very week for the first time in years. When we asked if we might come back after the show, George replied, "I'm glad you asked. The place where you were planning to stay is right in the middle of the riots. A Jaguar? British plates? They would have rolled your car out into the middle of the street for the bonfire."

Well, we drank all their whisky and sang all our songs. We laughed and we cried and we told more stories than I can remember. Manda showed us the Giant's Causeway and Castlerock Station. They showed us where the show bands had played, where they fell in love. Manda made me porridge with homemade jam. I always thought porridge was just for bears and little girls in fairy tales.

George and Manda came over once to visit a couple of years later. I always get birthday and Christmas wishes from them. My goal in life is to live long enough to eat avocados from the little tree that they bought me while they were here. I moved it with me to my new house six months ago. It's fertilized with my mom's ashes. She would like that.

My success isn't that hard to measure.