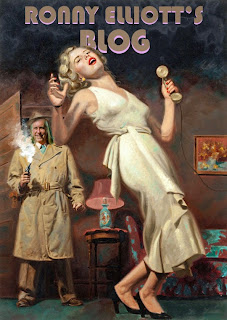 So, today's cheater news headline is about FIFA. Those crooks. Everyone who follows soccer, or football to the rest of the world, has always known that the international governing body exists to enrich the individuals who have made up the group. Now, with Qatar having been awarded the World Cup for 2022, they went a little too far. In yesterday's lexicon they "jumped the shark."

Last week it was four of the major world banks. Again. They were fined, collectively, about six billion bucks. You put me in a business where I can pay six billion dollars to make hundreds of billions and I'll show you a wealthy man.

Now, I can't waste my time and yours listing all the cheaters. The ones whose names bring to mind their capers belong in a special category, however. Jeb Bush. Charles Van Doren. Tiger Woods.

My beloved rock'n'roll fell victim to the heavy hand of the cheaters as soon as it became obvious that the young folks who were listening to it suddenly had discretionary income. Organized crime already controlled the jukebox business. Once everyone recognized the real value of a "hit record" the game changed. Oh, we've had payola for as long as we've had radio and whores and drugs. At least Leonard Chess and Ahmet Ertegun liked music. Dick Clark? Alan Freed? I'm not so sure. They might have gone into plastics had the dice rolled differently.

My take on our culture, I'm sorry to say, is that the cheaters have now written the rule books. They own most governments at most levels including our own. Sure, it's easy for us to cluck our tongues and shake our heads when a new scandal involving Russia or Greece comes across the evening news. We seem to be unable to accept the shenanigans of our own thugs as corruption and crime. I mean, surely those fresh scrubbed, earnest fellows deny climate change just because they're not scientists and because they learned in Sunday school that the Big Guy himself controls the weather. Right?

Unfortunately, profit is easy and profit is everywhere, potentially, if you're willing to cheat.

War? Our number one industry now. We arm the world. Far too many fortunes have been made to ever turn back. "War Without End" should be printed on our currency right under "In God We Trust."

Think you'll coast above it with your spiritual beliefs? I've got the number for a guru who can have you levitating by sundown. For a fee, of course.

Yeah, we need a revolution. For you spooks who may check on my on-line blarney, relax. I'm talking about love. It's free. It's easier than cheating.

Posted by ronnyelliott at 9:21 AM