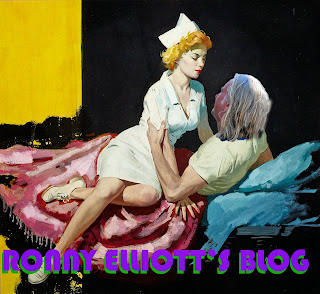 How old is too old to rock'n'roll? Maybe it depends on the rocker, huh? (Did you catch my clever pun, slipping in "Depends"?)

Young John Lee Hooker was good. Real good. We're fortunate to have plenty of film footage and tons of recordings from him from all stages of his career. That old man, though; the beautiful chocolate gentleman in the chair with the hat and the see-through nylon socks- that was magnificent. A force.

Well, after next week, I have nothing booked. Nothing. Ever. Just because you're paranoid doesn't mean they're not out to get you.

The radio station here, WMNF, is the main promoter for the kind of music that I play. Well, to be honest, nobody actually promotes the kind of music that I play, but you know what I mean. Well, now sir, the last time that I played a Ronny Elliott show for them was for my sixty fifth birthday. I'm sixty eight. The last time that I played on their Tropical Heatwave show was at least ten years ago. They're having a "British Invasion" tribute show in a few weeks. I know because I heard it announced on the radio. I wasn't invited. Hey! I was there for the goldarned British Invasion.

Every year I look forward to playing the Woody Guthrie Festival in Okemah, Oklahoma. I have for the last ten or twelve years. This year I found that I was booked for Wednesday evening. Festival really starts on Thursday. I thought it might be a good idea to save their money for the airplane ticket.

Don't get me wrong. I love my place in this business, in this world.


Posted by ronnyelliott at 9:59 AM