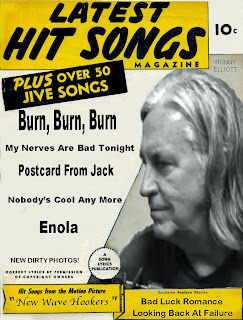 Oh, I've been wildly successful in showbiz, something of a legend in the music business. Well, of course, that's not true. It was in the eyes of my mother but I guess she wanted to see it that way. I was always the smartest kid in class, too, in her sweet eyes.

Truth is I've never sold more than a handful of any of my records. That's going back to 1965. Maybe I should have considered barber school.

We've been through plenty of my close calls with success. The Red Baron was brought to Tampa for us. Then Phil Gernhard wrote in the Snoopy part and recorded it with the Royal Guardsmen, instead, due to draft problems. Oh well.

Next, Dick Holler insisted that my pal, Spencer, and I record his song, Abraham, Martin and John. He didn't like it and we didn't either. Our version was never used for anything except to show the song to Dion. What the heck.

When Kent Lavoie brought in Me And You And A Dog Named Boo, Phil and I looked into each other's eyes. A hit! An obvious hit. Phil didn't want to do it with Kent, though. He didn't think Kent had any star quality. He had us work it up to record in Duckbutter. Well sir, I put the backbeat on the one and the three and I brought out the lap steel. Great stuff but no longer sounding like a hit. Phil didn't hear it until we showcased at Ungano's in New York. He rushed Kent into the studio as Lobo and, voila!

Oh, I've got a million of them. Bob Ezrin, Fresh Air, Norman Petty, Bo Diddley, Berry Oakley. Pretty much all good stories but so what?

I wouldn't change a thing. Nobody loves to go to work more than I do.


Posted by ronnyelliott at 9:53 AM