No Trouble At All 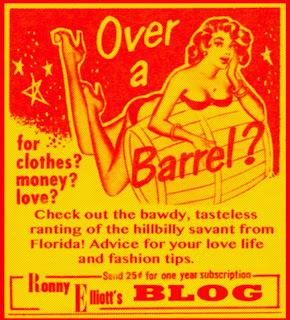 Oh, I wish you could have seen some of what I've seen. I witnessed the Von Brauners whip the Volkoffs so that the dirty commies had to leave town.

My mom held me up to the tour bus window so that I could shake Roy Rogers' hand. Actually, he shook my two fingers, as I recall, but that was some time back.

The only time I ever skipped school was to go see President Kennedy speak at Plant Field in Tampa. We lost him a week later.

Gregg Allman took me outside the Electric Zoo to play me rough mixes on a cassette from the first album. It was pretty good.

I saw a fistfight, and I use the term loosely, that involved Don Garlits, Art Malone, Chris Karamasines, and Bobby Hunt. Good thing those guys didn't fight for a living.

The Lone Ranger gave me a mask at an air show in Birmingham. I seem to have misplaced it.

Pop Staples and I were left in a room together with this; "Ill leave you two alone. I know you have a lot to talk about." We had nothing. After a bit he had the good sense to leave.

I hope I live a lot longer and a lot more stuff happens.


Posted by ronnyelliott at 9:03 AM