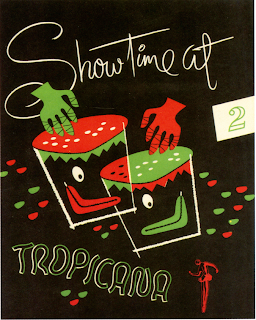 Well, the fellow assigned to me from the State Department wasn't just helpful, he was downright friendly. I had applied for a license to visit Cuba as a writer. I was planning to write about Cuban music. My guy called from D.C. and asked if I had anything available that I had ever written for a newspaper* or magazine.

My most recent newspaper articles were from The Tampa Tribune from the late '60's and early '70's. He assured me that they would do just fine. I sent him clippings of stories about cars and race car drivers and reviews of rock'n'roll records. The only magazine pieces that I could find in the attics in the trunk were my Ask Dr. Underwear columns from Go! Magazine from the '70's. That had been my "advice column" that I did with Harry where I made up the questions so that I could match it with  snappy, clever answers. I split my paycheck with Harry so that I could use ridiculous photos of him for the column. The fact that decades had passed since this drivel came out didn't seem to matter.

Well, like most of us, I had dreamed of seeing Cuba and it was as special and spectacular as I could have imagined. The beauty of the land and the architecture, at least what's left of it, was beyond my wild expectations. The people were the sweetest that I had ever met.

It didn't take long to realize that I was in way over my head to write about their music. It was as though some wild and crazy guy from another culture decided that he would write about "American music." Every club that I entered slapped me in the face with something wonderful that was nothing like the music from the previous venue. It was all over the board with no boundaries. It didn't take long to recognize that I won't live long enough to know much about all this magic.

Maybe I was ready for some of the splendor and most of the heartbreak. What I had not been made aware of was the situation of the domestic animals on the streets. The dogs of Havana captured and broke my heart. I'm hoping there's a heaven.