My Most Successful Romance 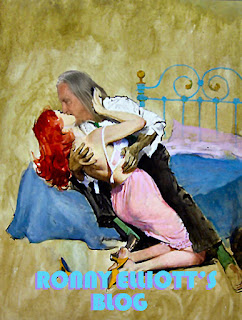 When I was nine years old Brigitte Bardot took her clothes off onscreen. For me! That's my story and I'm sticking to it. What a fine love story it has been. One for the ages. I was probably twelve by the time that the hormones kicked in and I knew it was the real thing.

Now, after years of abject failure, I am back to my winning ways. Now, in my Walter Mitty ways, I lay my cape over every puddle for her. I stand between her and the evils of the world. Once, after too many fancy, hipster beers, I mumbled something to her about cutting off an ear and sending it to her. I could see from her expression that she had no interest in one-eared men.

Here, friends, my story takes a turn. Unlike BB, who has never acknowledged that relationship at all, at least not publicly, this object of my undying love and lust has sweetly informed me that she has no interest in me whatsoever. Well, I knew that. I may be socially awkward but I'm alert.

Maybe I should do the ear thing.

Don't consider this a whining, self-pitying account. In fact I bristle at my own hubris. This is probably my most successful romance. I've never been happier.


Posted by ronnyelliott at 5:44 AM