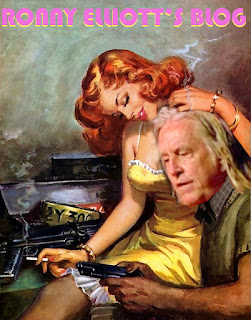 Kids play with guns. I played with guns. Toy guns. Uncles took me hunting. I never killed anything. I remember so well the sense of relief that I would feel as we would leave the deer stand or the dove field. It far outweighed any sense of shame or embarrassment that accompanied my failure as a hunter.

Now, of course, if I hear an unsettling noise outside I go to my bedside cabinet for my blank gun. One day I'm gonna end up face to face with a thug with a bigger blank gun. I got mine when I was six years old in a souvenir shop in Gatlinburg. I'm still on my original tin of blanks. Not many unsettling noises around here and I'm a good sleeper.

Guns, I have to say, is a subject that I try to avoid, aware that I will never change anyone's mind, much less anyone's life. I'll say it here, though- I don't like them. Toys, automatics, handguns, rifles, shotguns, squirt guns, machine guns, zip guns.

None of the excuses move me. Not a little. War is outdated. Insecure males can now do battle with computers. Hunting? I don't consider anything a sport where one team hasn't been informed of the game. Got that, Junior? Capiche, Eric?

Can I tell you how proud I was when I noticed that NRA hacks began following my Twitter account when I thanked my "president" and my lucky stars when he issued his executive order allowing lead back in ammunition.

Remember- when guns are outlawed, only aging hippies will have blank guns.


Posted by ronnyelliott at 7:21 AM