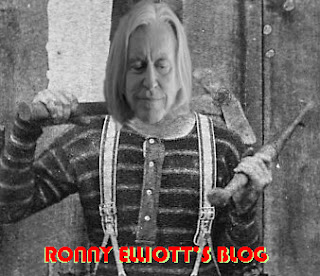 Seems like I spend way too much time wringing my hands, telling anyone who will listen that rock'n'roll is dead.

Well, it is. It has. It did. That mausoleum in Cleveland even calls itself, "The Rock And Roll Hall Of Fame"

Sometimes they use, "The Rock & Roll Hall Of Fame."

It's "Rock'n'Roll," fellows. You'll have to type it fast to get it by your spell checker.

Well, as society unravels and Donald Trump dominates the TV screen a new reality is forced onto these orbs. The mere passing of rock'n'roll is hardly significant.

Buzz Aldrin thinks that we should get to work quickly to colonize Mars in case "something goes wrong" with the earth. Let me apologize right here to my Baptist friends- something has gone wrong! Man.

Buzz is a hero but he's old. Really old. He's older than I am.

If Letterman ever did a Top Ten Reasons The Earth Is Ending list, every clue would have pointed to man. Climate change. War. Population. Hate. Greed.

Me? I'm an optimist. The glass is half full. The earth's only partially ruined. There are lots of beautiful people out there. They just don't run the governments. Oh, the banks, either. Or the churches or the insurance companies or the record labels or the television networks, ad nauseam.

Sit back. Those guys may destroy themselves and each other before they burn down the planet. Meantime, love like crazy. It's not just good, it's all we've got.


Posted by ronnyelliott at 6:57 AM