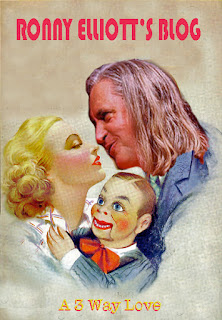 By 1957 I was becoming something of a rock'n'roll snob. I knew that the Sun sides were finer than anything that RCA was gonna be able drag out of Nashville or New York. I was certain in my half-developed mind that western culture had peaked in 1956.

It would be decades before I ever saw video footage of the "real Elvis" from 1954. In relative terms the social phenomena had already begun to morph into an act. The first Elvis impersonator.

Posted by ronnyelliott at 4:18 AM