I think I told you before that when I was kid, growing up in Birmingham, I thought that when you turned on the radio, once the tubes warmed up, Hank Williams sang. In those days competition was fierce for children's shoe sales.

I must have been four or maybe five years old. First my mom took me into the Red Goose store. Their gimmick was a little recording lathe. You could have your kid's foot measured and leave with a two-sided record. Looking back, I'm pretty sure that my mom was starting her push to make me a hillbilly singing star. My first ever recording was Hey, Good Lookin'. Of course it was. My b side was a rollicking version of Someone's In The Kitchen With Dinah, not to be confused with I've Been Working On The Railroad, which appropriated the original.

We left with a little pair of those sandals that kids wore back then and my little 7", 78 rpm record. Poll Parrot was our next stop.

They had an x ray machine that allowed the mother and the kid to look at the green glow of the kid's skeleton foot to see just exactly how the new shoes fit. I'm guessing that some weird spikes of rare foot cancer in men of my age from Birmingham still puzzle the medical establishment.

In my excitement taking my Red Ball Jets from the shop we left the bag with my record in the store. Neither of us noticed until we got home.

It's probably a good thing that I never became any kind of showbiz sensation. Can you imagine what that record would bring on eBay today if my name had become a household thing. 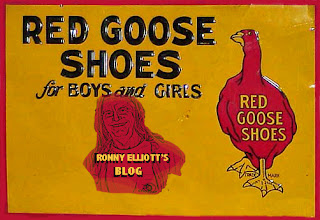 Posted by ronnyelliott at 4:40 AM