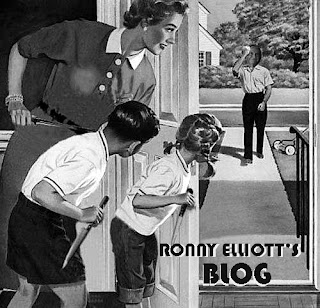 Playing the music that I love on the radio reminds me of just how much this stuff has shaped my life. I never play music at home. The only time my radio is on is when I'm in the car. That's not often.

Now I'm back in the third grade playing "My Baby Left Me" for my schoolmates, trying to explain Elvis Presley. I'm dragging my little box of 45's down to the playground to spin Little Richard and Nervous Norvus for the other kids. There will only be one or two who want to hear it. That's on a good night.

By high school and the British invasion I had the attention of my peers. For awhile.

My lifelong career has followed the same uncrowded highway. Actually more of a two lane country road. I saw myself described in the All Music Guide, "A cult artist in the best sense of the word."

Hey, I'm not trying to be perverse here. Sometimes I just have to answer that call and share the beauty of it all. It's all tied up with the love and the secrets of the universe. There's no secret handshake. Not that they've shown me. When Mr. Rodney introduced me to Tiny Tim, we recognized our reflections in the soul mirror. I don't know Bob Dylan. I've never seen him. I do understand the connection that he describes with Tim.

Sometimes I think I oughta' take my box of 45's to the middle east for spell.


Posted by ronnyelliott at 9:20 AM