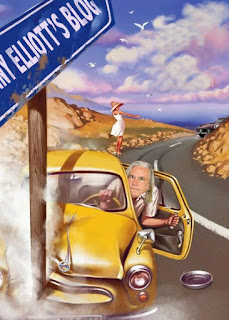 Four? Five? I'm pretty sure I had't started school yet. Bubba, from down the street, was a year or two younger. His funeral changed everything. Mortality reared its head and loss became the source of my sorrow. One of his parents, I don't remember which, backed over Bubba in the driveway.

Until that event I had no concept of death. I had never even lost a pet. Oh, when the cowboys shot the Indians and they fell off their horses, I knew they were "dead." There was nothing sad about it. Good guys won. Villains died.

I coasted for years after that. My pal, Ed Brown, always claimed that youth had no concept of mortality. Well sir, Ed Brown said plenty and now Ed Brown is dead as a doornail.

Viet Nam brought the idea of finality of death home. I didn't lose many friends, personally. I came up mostly with white kids of privilege. Every name in the newspaper broke my heart every day, though.

Pets who loved their way into my heart came and went and I never got over a single one.

Lottie almost made one hundred. The doctor said she held on for so long because she was afraid to go.

When my mom went, I was numb.

Posted by ronnyelliott at 7:18 AM