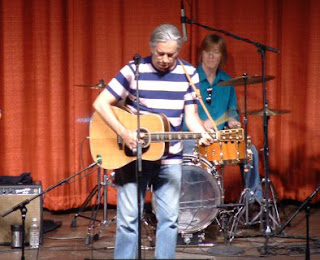 It was at what I remember to be the first gathering of the new Americana Music Association and we were at some little lodge in Lake Tahoe. Beautiful setting and a lot of really nice folks but the dirty politics of the music biz was being assembled for the benefit of the New Nashville. I'm slow. I thought I had finally found my niche.

I was there with my pal, Walt, and what we did find was our roommate for the weekend, Doug Sahm. I had worked with Doug when the Sir Douglas Quintet had played the Star Spectacular in 1965 or '66 in Clearwater. He had been a small time rock'n'roll star then. Now he was a legend.

We had so much in common and everything was fun. He never shut up. He never slowed down. We talked about wrestling, Hank Penny, Amos 'n' Andy, baseball and coffee. At one point I was chatting in the hallway with Al Moss as Doug sauntered up to us. Wanting to help me out and enhance my standing in the alt-country community, Al asked Doug, "Do you know Ronny Elliott?"

Doug wrapped his arm around me and exclaimed, "He's my roomie."

One afternoon in our little lodge room Doug was trying to describe the little towns in New Mexico to me. "You know, they ride into town two or three times a year, kill a cowboy or two and they go home."

He just looked at me. We did play some and we did mess around with some ideas but we never got back to that. I saw him one more time after Tahoe. He was given a special award at South By Southwest later that year. "Hey, my Florida boys," he shouted when Walt and I ran into him at the Broken Spoke. That was my first SXSW. I got home and wrote South By So What for the new record. The chorus ends with the line, Somebody tell Sir Doug I said hello. Pretty clever line, I thought. We decided that South By So What should be the radio single.

Doug passed away the week that it was released to radio. Turns out to be the saddest thing I ever wrote. They don't make 'em like Sir Doug any more. Never did except for that one time. I never throw anything out, though.


Posted by ronnyelliott at 1:31 PM