Got Time For A Beer? 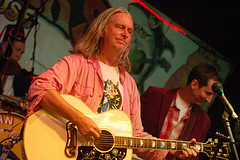 Never give up on your dreams. Any of 'em. My president has let me down and broken my heart over the last three years. Oh, I think he's smart and I think he's a pretty nice guy. That's not enough for me, though. I want war to end, the hungry fed, the sick cared for. I want taxes to be fair. Let's play nice with the rest of the world. I want to hear the truth. Every time. We have an obligation to provide for our veterans and to educate our kids. We surely don't deserve to be coming in at #29 in infant mortality. Let's take care of the ones who can't take care of themselves.

Now, I'm not particularly bright but I am very much aware that President Obama spent a lot of time huddled with his closest advisors today before he came out supporting gay marriage. Certainly some of them cautioned him against the move based on politics, if nothing else.

This time he stood up for right, though. Now he's the guy I want to go have a beer with. I'm hoping that over the next four years he gets down to all my other issues. That's my president.

Posted by ronnyelliott at 4:48 PM