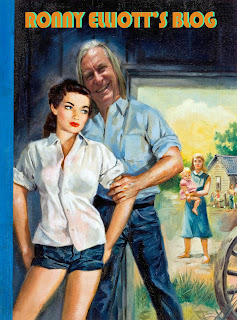 That's what they say, right? Only two kinds of people in this world- Christians, Muslims, Jews and heathens. Oh, wait. That can't be right. Short ones, tall ones, skinny ones, fat ones. No, that's not it.

Well, sir, it seems that scientists have discovered an "empathy gene." Some of us have it. Some of us don't. Insert your own Democrat/Republican joke if you're so inclined. At least we're down to the "two kinds" question.

Don't go studying up on psychopathy or narcissistic personality disorder. It will only make you sad. A good psychopath, contradiction in terms intended, thinks you're just like him. He thinks he's just better at it.

All my life I've been surrounded by the right kind. I don't know if I've lived my life for the rock'n'roll or if rock'n'roll has given me life. Who knows? Who cares?


Posted by ronnyelliott at 7:03 AM