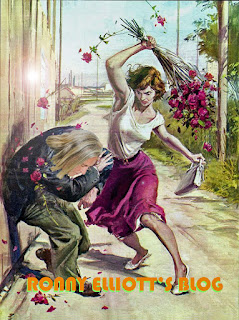 Politics and power. The jig's up. huh? What a shame. We now know just what a rotten game it all is. Don't tell your daughters that they could grow up to be president. You'll hurt their feelings.

In an internet age we know too much about everybody. The press made sure that we did not know that FDR was a cripple. In the '60's nobody told us about JFK's womanizing ways.

There was a time when you were clean if you could stay off the cover of Confidential.

Do we have worse public servants or more information?

The revolution will run on love. They don't have an army if we don't give them soldiers. Their green paper is worthless if we don't play. Those aren't their airwaves. Turn up your radio like Bo said.

The oil and natural gas under this land and under these waters belongs to us. It's not theirs to sell.

Looks to me like they let the game get a little too complicated. The emperor has no clothes!

What a party. It's a beautiful world.


Posted by ronnyelliott at 4:29 AM